Wave your cloth, pull down the star with full of starlight – Jiaxing BCOS fashion showing 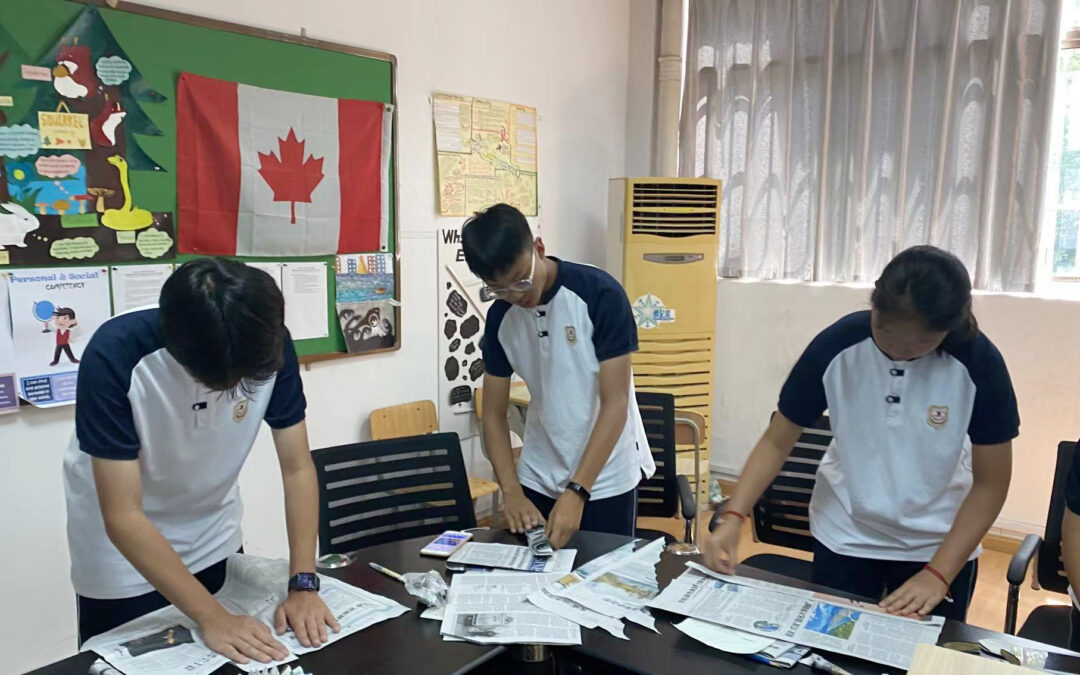 In September, a new term with cool autumn breeze, the special event “Speak Up” came back in Jiaxing BCOS.

At the beginning of the activity, the G11’s and G12’s helped the new G10 students adapt to the entire English environment. The new students plunged into their learning life with abiding and unbeatable passion and dragon-like spirit. At the start of the first week, the first challenge came: every speak up team needs to make clothes bearing their own group name and present it in front of the whole school. To respond to the concept of environmental protection and pursue the low-carbon and frugal lifestyle, our school chose old newspapers to make clothes for the fashion show.

As the poem says,“Looking at the grand mountains and rivers, we can set people a fire with our words.” In the activity, the G11s and G12s expressed their own views and brough up with quality suggestions. This inspired the new students to exchange their ideas as the poem describes, “(people are) Filled with student enthusiasm, boldly we cast all restraints aside.” The G10 new students were brought into that atmosphere and integrated into the group discussion in English quickly.

The time to prepare passed in the blink of an eye, and as the formal fashion show finally started, the groups were filled with half-anticipation, half-nervousness. A supermodel from the group of Lynx dressed up as an angel with wings, while another student from the same group dressed as a devil with the weapon in the hand. The students stood between them represented the “cat model and his owner”. As the messenger of heaven and hell paved a road for the cat model, that creative design soon caught everyone’s attention. With the catwalk, the “cat model” imitated the walking posture and graceful movements of a bobcat, gaining exclamations from the audiences. When they walked into the end of the performance, all the members came from Lynx calling out their slogan, which made a deep impression on the audience. Not surprisingly, they were the champions of the contest.

Additionally, the team in second place and third place also designed eye-catching clothes and performance. The second-place winner, Beluga, had two models dressed up as a beluga whale and trainer respectively. When the trainer forced beluga whales to perform, an enthusiastic spectator rushed out, turned away the trainer and set the beluga whale free. Their performance delivered the meaning of returning animals to nature, and the importance of the harmony between humans and animals. This idea also happened to the third-place winner, Polar Bear. In their design, stereotypes were broken, Polar bears and the hunter live in peace together. The harmonious lifestyle between humans and animals was also remarkably performed by models’ professional performance.

Other group’s performances were also attractive. The students from Snowy Owl did not satisfy the wise image of an owl, but they added the claws and a sharp beak for that. Their performance was fully fledged, the haughtiness of flight also added the sense of wisdom in the performance. As they walked, these models waved rings pass the audience, showing their heroic bearing. The group of Black Widow endowed a cute, humorous, even charming image through the black widow spider, which is ferocious, cold-blooded, and merciless. In addition, they also mixed some martial arts elements. Two walking, tough guys were covered with oriental long knife and eagle claw hook, making the performance more diverse in a visually attractive display to the audience. The group of Narwhal used the narwhal princess and her bodyguard as the theme, the male model wore a mask adorned with Narwhal’s distinctive tusk and newspaper tail. The female model wore a dress, and a crown, holding the magic wand with her hand. When she was walking, her long dress slightly shook while the male model brandished a trident, he guarded the princess, showing the heroic qualities of narwhals.

During the performance, many new student models felt nervous and afraid, but with the team cooperation and communication, they were connected from this activity and gained confidence as well. New team members who have never met before also learned from each other; everyone’s team spirit and innovation grew. All the judges were inspired by the vitality and imagination of the youth.

This fashion show activity was an opportunity for youth talent to bloom through performance and a chance of enhancing team communication and cooperation. The end of this activity not only remained as a happy memory, but also foreshadowed a wonderful future！In Jiaxing BCOS, we can improve ourselves, both in study and in practice. We will set sail in pursuit of our goals with a full-fledged flag. We will sail through winds and waves, fly up for over 90000 miles like the most ambitious eagle, and cut through thorns to achieve our dreams. We will clear the barriers to our success, which blooms at the best stage of our life.