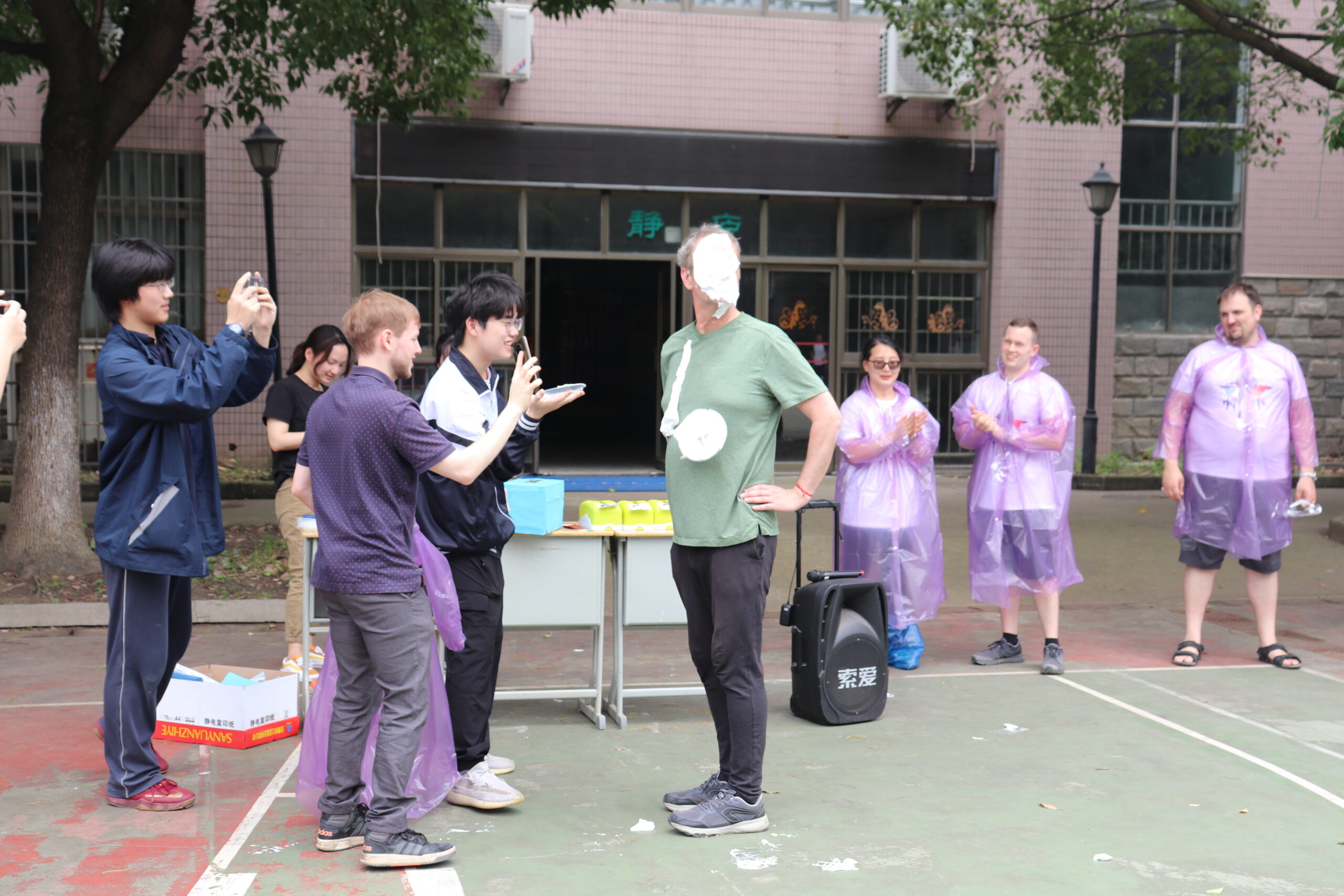 On May 22, students and teachers of Jiaxing BCOS came together to hold a grand and interesting event: “pie day”.

This is a traditional project at BCOS, usually held after the annual Terry Fox love run. Each Speak Up group would get some “lottery tickets” and the team leader would assign them to each group member. Students would have two days to vote on the teacher that they had wanted to “pie” in the face. On the “pie day”, Canadian teachers announced the number of donations raised throughout the school year and drew from the lottery box to decide on a lucky student. And then the students cheered as the activity was underway.

Students were in high spirits while our principal Mr. O’Ryan bravely asked for the “pie” three times! One after the other, the shaving bubbles were rushed towards the teachers. Although there were raincoats and goggles, the teachers were still covered with foam with no exception. Mr. Lee, who is far away in Canada, also sent a video of him being pied in the face through WeChat. Mr. Lee’s pieing was much harder, which was really funny and successfully ignited the laughter of all students.

Although the students were suspected of “revenge for public affairs”, both teachers and students were happy as both sides had their wishes met. So, the journalist department was fortunate to interview one of those lucky people: Steven, Shi Yue, in G12. Due to luck, he was able to take the first shot at Mr. O’Ryan’s face and was really happy about that. “Thanks to Mr. O’Ryan for giving me this opportunity to apply the pie on his face. I feel very happy and excited.” The “Pie Day” itself is the continuation of Terry Fox, and also shows the love I have for Mr. O’Ryan since he had asked for the pie three times, something which left many teachers afraid. As a grade 12 student, this is my last pie day at this school. I am very lucky to be the first pie person. I believe it will be a very interesting memory of high school life and will accompany me into the future. On my way to study abroad, BCOS has been the starting point of my long journey, and has also become a shining pearl, which will never be covered by dust, in my memory. ”

Pie day in 2021 started a new life in the difficult period, and it was the explosion of joy and encouragement that had been accumulated for a whole year. It is the unforgettable memories and feelings for all the G12 students, the wonder and joy for the G11 students, and the start of exploration of the G10 students. It is the connection between people, the connection between hearts! As long as there is light within all the students’ hearts, that light will inevitably grow to be as bright as the sun.